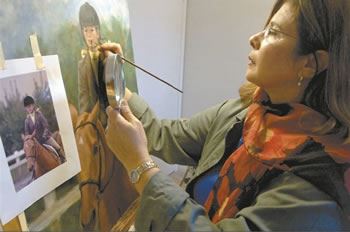 Award-winning Palm Beach/New York portrait artist, Renée Plevy, has captured the attention of art lovers, students and aficionados for more than 40 years. Renée’s paintings have been featured in more than 65 shows and galleries, including a one-woman museum show at the Paterson Museum. She has received national attention and garnered numerous awards including “Artist of the Year” from The Bloomfield Art League and First Prize from the Boca Raton Museum Artist’s Guild.

Starting in 2011, she has founded “Portrait of a Woman”, which annually raises monies for Quantum House by honoring prominent Palm Beach Woman at a special luncheon. Six oil portraits are unveiled at the luncheon, all of which become part of a legacy portrait series for Palm Beach County.

Renee now does extensive teaching of her craft at the Boca Raton Museum Art School, and special workshops at the Mandel Public Library in West Palm Beach, and The School of Visual Arts in Jupiter.

Frequently called upon for special projects, Renee has found herself painting a portrait of Vanilla Ice for his Vanilla Ice Project television show, as well as being a part of it. Doing television and radio are always a fun part of being a bit of a celebrity in the Palm Beach community.

When a member of the art community in New York City, her art studio in 41 Union Square was always jumping with activity, between teaching portraiture at the School of Visual Arts, and being a part of the Artist Equity Committee to find a visual arts center for the tri-state area for the 16 national art organizations based in NYC.

As a colorist, interpreting personalities through upbeat colors, Renee has incorporated magnificent South Florida tropical colors into her portraits, resulting in joyous life like paintings.

Hi, this is Renee Plevy.
I’m looking forward to speaking with you. You’ll like that I’m running a special offer during Covid!

I’m available right now by clicking here to initiate a call, or if you prefer I can call you.